THE WORDS OF JESUS

Therefore I tell you, do not worry about your life, what you will eat or drink; or about your body, what you will wear. Is not life more than food, and the body more than clothes? Can any one of you by worrying add a single hour to your life? But seek first his kingdom and his righteousness, and all these things will be given to you as well. Matthew 6 verses 25,27 and 33 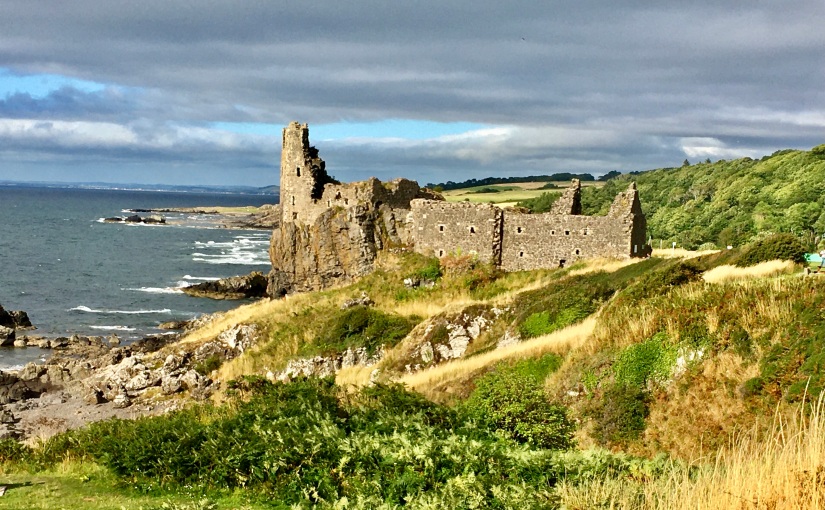 Culzean Castle on the Ayrshire coast is a National Trust for Scotland property and is a place that we love to visit each year in late summer. It is beautifully situated on the edge of the cliff with magnificient views over the firth to the Isle of Arran, and Ailsa Craig. The top floor apartment was given to President Dwight D Eisenhower after the last world war in appreciation of his leadership as the Supreme Commander of allied forces in Europe. It is said that he visited on four ocassions, once while President of the United States. Other apartments are available for rent today from the National Trust. Nearby is the village of Dunure with a more ancient (1256) castle. The remains seen today however are from the 15. -16th century. Both these castles are associated with the Kennedy clan, although the Mackinnons are said to have held Dunure Castle at some point after the battle of Largs.

We love to stroll in the quietness through the woods, and visit the walled garden and the castle gardens as well. This year the fountain unfortunately was under repair, so we didn’t see that operational.

This month we made an unplanned return trip to the Isle of Cumbrae. We had driven down to Largs on a beautiful sunny day, but found the resort very busy, so hopped on the ferry which was awaiting at the quay. We were so glad we did as the island was was so beautiful and we took the opportuniity to visit the Cathedral of the Isles and College of the Holy Spirit for the very first time. This is a Scottish Episcopal Church building.

When we are out and about we often stop and stand in awe at the greatness of God. Last Sunday at church we were reading from Paul’s letter to the Church at Colossae in Chapter 1 which speaks of the supremacy of Jesus Christ. It reads

The Supremacy of the Son of God
The Son is the image of the invisible God, the firstborn over all creation. For in him all things were created: things in heaven and on earth, visible and invisible, whether thrones or powers or rulers or authorities; all things have been created through him and for him. He is before all things, and in him all things hold together. And he is the head of the body, the church; he is the beginning and the firstborn from among the dead, so that in everything he might have the supremacy.

And at out Wednesday Prayer Fellowship we sang that well known hymn ‘How Great Thou Art’. Some veses go like this –

When through the woods
And forest glades I wander
I hear the birds
Sing sweetly in the trees,
When I look down
From lofty mountain grandeur
And hear the brook
And feel the gentle breeze

And when I think that God, His Son not sparing
Sent Him to die, I scarce can take it in
That on the cross, my burden gladly bearing
He bled and died to take away my sin

I hope you enjoy what remains of the summer